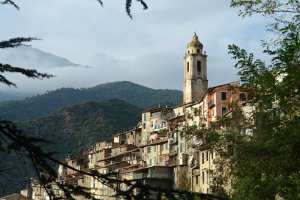 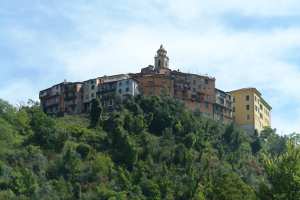 A quiet village with beautiful medieval lanes and houses.

Come and take part in one of the numerous festivals in the village, for instance the feast of the patron saint, Santo Stefano

The highest point in the village today is the clock tower of the Santo Stefano parish church, which was constructed on an old fortress. There is also a crucifix of Maragliano in the same church. However, the church is not the major highlight of the village. It is in the Piazza XX Settembre. This is where the village community likes gathering for a chat in the cool shades of the houses.

If you exit the village in the direction of the ancient border between Pigna and Castel Vittorio, you will pass by the ruins of the Roman church of Santa Maria del Nogareto. The ruins are found near the bridge above Lake Pigo, and they date back to the 12th century. The church was reconstructed in the 16th century and is today surrounded by thick green olive and chestnut trees.

The picturesque “Carugi” in the centre of the village are very attractive. These are narrow blind alleys formed by the house fonts. These house walls were earlier used as fortresses against the Saracens.

There is a picturesque mountain road running from Pigna past Santa Maria di Nogareto up to the municipality of Baiardo. This road is very suitable for mountain bikers, but it is also very popular among hikers. Another interesting road leads down into the green Rio Godale valley, where the traditional sports discipline of elastic ball is still being practised even today. The surrounding region is a real paradise for hunters. It is home to hares, partridges and thrushes. The fishing streams with their clear waters and large numbers of trout will also make every fisherman happy.

Castel Vittorio is built on a steep hill overlooking the Nervia Valley and the Pigna thermal spa, just a few kilometres away from the sea and in sight of the Maritime Alps. Documents dating from the thirteenth century show that its ancient name was "Castrum Dodi". It belonged to the Ventimiglia feudal estate and was later for a long time under the dominion of the Genoese. It was given its present name in 1862, in honour of the Savoys, who were its owners during the eighteenth century.

You can still see the ruins of the old citadel, which was the object of contention between Savoy and the Republic of Genoa, as well as an architrave bearing the Genoese coat-of-arms.

Castel Vittorio is one of the villages in the province of Imperia which lies in the Liguria region. There are several other villages near Castel Vittorio, for example: Triora (32.4 km), Pigna (5.6 km) and Vigna (25 km). When coming from Ventimiglia, follow the SP64 and drive past Camporosso and Dolceacqua up to Castel Vittorio.