Spend Ligurian holiday in the small village of Ellera in Liguria, Italy and enjoy afternoon along the river and then taste Ligurian specialties in one of the very good restaurants. 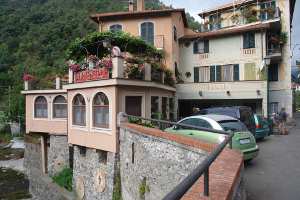 It is a historical village with old churches and ceramics festivals

The church of San Bartolomeo, which was built in 1628 just outside the village of Ellera, right on the banks of the river. Inside the church there are artistic works from the 18th century. There is also the Santa Maria Magdalena church on a rock just before the village. The church stands on the old ruins of an old chapel.

An art festival is also staged in the village during which ceramic plates are decorated artistically and displayed in a kind of „Outdoor-Gallery“.

The village has its origins in the early Middle Ages. Because of its proximity to Albisola and the convenient location on the banks of River Sansobbia, the village was regarded as a place of refuge from the Saracens.

The historical centre of town and the houses strewn across the neigbouring area date back to the 16th century, when the farmers extended their settlement to the surrounding hills. Among them are several water mills which drew water from the river for grinding cereals and pressing olives. Some crucial Napoleonic battles were fought  on the hills of Ellera those days.

The Napoleonic army and the Austrian army fought a battle at the place where Monte San Giorgi, one of the highest mountains in the region, ends. From 1803 to 1929, Ellera was an independent municipality, but was later merged with Albisola.

Ellera is one of the villages in the province of Savona, which lies in the Liguria region. There are several other villages near Ellera, and they include: Corona (10 km), Magrania (2.1 km) and Stella (6.4 km). Follow the highway exit to Albisola and drive along the SP2 up to Ellera.