With former donkey paths shrouded in history and tradition

Borello's history stretches back to the 12th century

Borello is a traditional ligurian village, connected with the other hamlets in the surrounding region via old donkey paths.

The church of San Rocco just on the lower side of the village cemetery dates from the middle of the seventeenth century and was built by the villagers in fulfillment of a vow after the outbreak of the plague in 1656-1657. Its façade is preceded by a portico with 10 columns in Corinthian style.

The medieval bridge della Madonnetta runs between Diano Borello and Diano Roncagli in the valley above the San Pietro river, and there is a shrine with a marble Madonna statue (Mater Misericordiae = Mother of mercy) at the end of the bridge.

Borello usually sets up a live crib in the Oratorio of San Rocco at Christmas, during which residents dress in old traditional gowns and display old works of art and crafts; the latest child born in the municipality represents Jesus in the manger.

Diano Borello is part of of the municipality of Diano Arentino; the locality was first referred to as "Villa" in the statutes of the Castrum Diani around 1363.

Diano Borello has been part of the independent municipality of Diano Arentino, which at the time was a newly created municipality, since 1923.

Borello lies behind Diano Castello, 1 km before you reach Diano Arentino when coming from the coastal town of Diano Marina through the SP37 and heading up the mountains. It is 14 km to Imperia, the provincial capital. 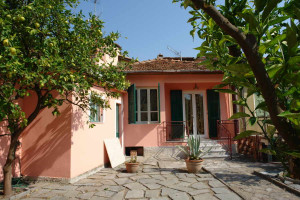