Visit the beautiful city of Zuccarello in Liguria, Italy and discover the old center with arcades and local restaurants. 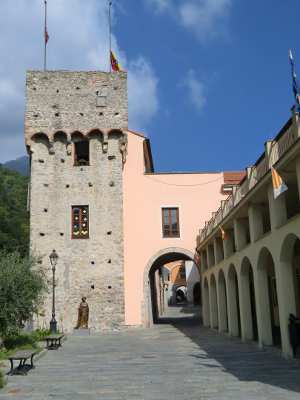 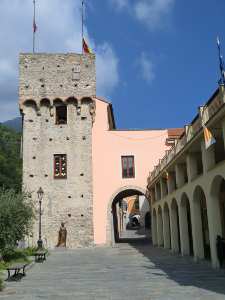 This is a medieval mountain village with historic buildings

The chapel of Santa Antonio contains valuable frescos from the late medieval times. Equally interesting is the Palazzo Marchionale, which hosts several frescos. In 1459 there was a historic meeting here between the representatives of the Genoan Republic and Marquise Del Caretto of Finale.

The castle of Zuccarello is also fascinating. It was built in the 13th century and restored many times. It was occupied by the French troops in the late 18th century. Today one can still tour the castle ruins. The small medieval lanes beckon you to take a walk and spend some time there.

The medieval village of Zuccarello was built in 1248. Due to its strategically favourable location,  Zuccarello was already being sought after and fought for during medieval times by various noble families.

In 1326 the Del Caretto family occupied half of the area around Zuccarello, and the other part was given to the Marquise of Clavesana. In 1397 Zuccarello became the seat of Marquis Carlo I. Del Caretto.

After a long legal dispute Zuccarello was finally given to Genoa in 1633 as possession. During the Napoleonic wars Zuccarello was the base of the French troops in the battle of Loana in 1795.

Zuccarello reverted back to the Ligurian Republic in 1797 and became part of the first French Empire in 1895. From 1861 onwards Zuccarello was part of the Italian Empire. From 1973 to 2011 Zuccarello belonged to the mountain communities Ingauna and Ponente Savona.

Zuccarello is a village in the Savona province which lies in the Liguria region. In the vicinity of Zuccarello are several other villages like: Vecersio (8.6 km), Vesallo (10.5 km) and Colletta (9.1 km). When coming from Genoa, turn off from the highway exit to Albenga. Turn left onto the SP582 and after passing Teciallo and Coscente by you will come to Zucarello.