Enjoy holiday close to the sea in the town of Bonassola in Liguria, Italy and visit the beautiful fortress of the city. 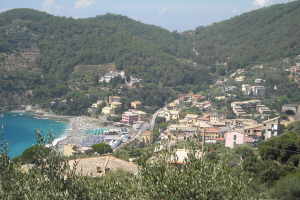 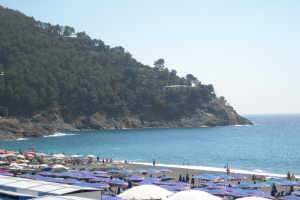 This is a small medieval village by the sea

Its versatile, beautiful hiking trails offer a unique view of the sea and mountains

The idyllic village of Bonassola is located on the Ligurian coast near Levanto,  La Spezia Province. The artistic town has a beautiful bay, surrounded by steep cliffs. The clean and wide sandy beach and its crystal clear water has become one of the favourite destinations for swimmers and snorkelers. The small old town with its narrow streets attracts visitors with its small shops and cafes. Peace and originality make Bonassola a place with a positive and pleasant atmosphere.

Tourists spend a holiday between the sea and the mountains in a unique landscape with a varied vegetation. Hiking and biking trails cut across the whole region and make Liguria’s natural environment accessible to every visitor. The Pista Ciclabile track with a length of 26 kilometres between San Lorenzo al Mare and Ospedaletti offers one a nice cycling tour.

The easy hike from Levanto to Bonassola (1 hour), along the ancient Roman Street with stunning views over the coast and sea is also recommended.  The hike from Framura, through the lonely rock and forest landscape to Bonassola (2 hours) is equally recommended.

A special high light of the village is the Madonna della Punta Church, on the cliff of the Western Cape. One can have a breathtaking view over the whole area of â€‹â€‹Punta Mesco to Portofino from here. In addition, the Santa Caterina Parish Church from the 16th Century is definitely worth a visit. The beautiful facade and bell tower with coloured marble stone make the church an impressive unique specimen. The Arduino tower and the remains of the fortress against the Pirates also let the tourists travel back into the history of Bonassola. The location is ideal for a holiday in a holiday house.

Bonassola was founded in the Middle Ages. Residents of the village lived mainly on fishing and agriculture. Trading could also be carried out using the small port and Bonassola exported mainly olive oil, chestnuts and wine. Bonassola became part of the Republic of Genoa. There were several raids in 1560 by pirates and many residents were kidnapped.

The economy picked up mainly through the cultivation of wine, lemons, mulberries and figs. Oil mills were also built in the area around Bonassola. Shipping brought about a rise in population and the economy flourished.

Bonassola was connected to the railway network in 1872. Bonassola’s economy faltered in the 20th Century. During the First World War, a freighter was sunk off the coast of Bonassola. During the Second World War Bonassola was occupied by American soldiers who wanted to use it as a base for blowing up the railway tunnel.

The railway network was rebuilt and expanded after the 2nd World War.

Bonassola is a town in the La Spezia Province located in the Liguria region. There are several other villages near Bonassola, and they include: Costella (1.6 km), San Giorgio (5.9 km) and Scernio (2.6 km).Take the highway exit to Deiva Marina when coming from Genoa and drive on the SP40 till you reach SP 41 and after that take SP42 to Bonassola.